When you read this edition of News and Notes, you will see that a lot of things are going on.  In the News and Notes, I have listed contacts for our Indivisible groups . Check our May list of activities, there is something for you.

Please e-mail the people below if you have Events, Issues or current Legislation to share. 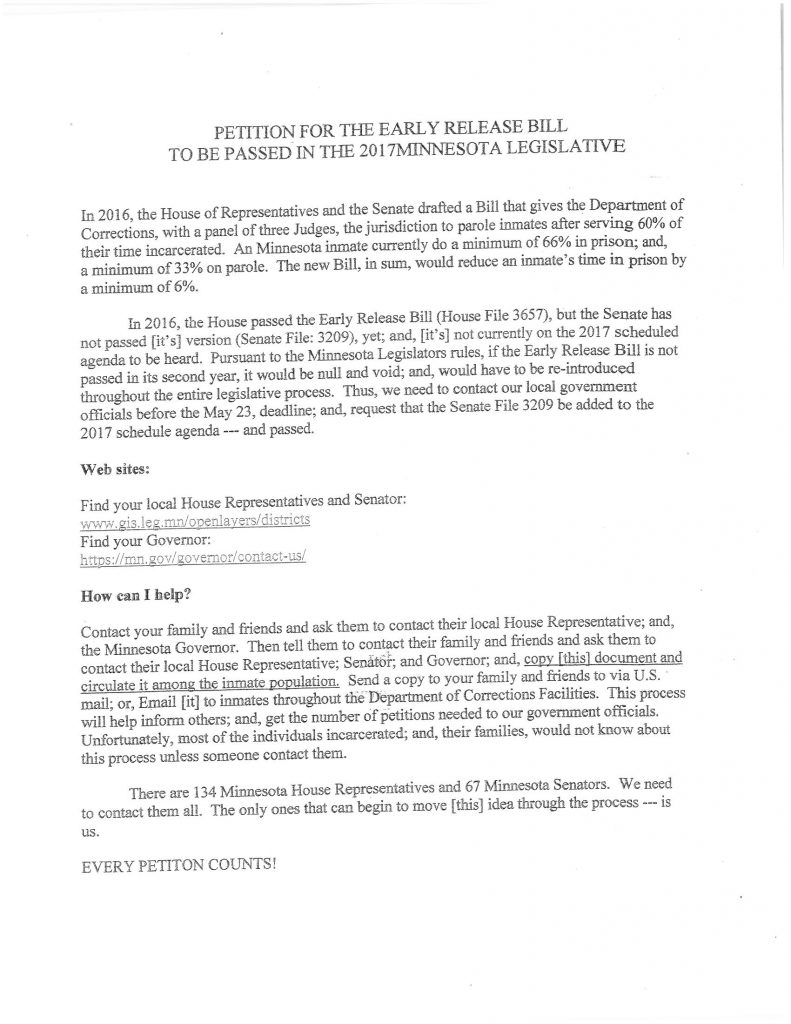 Last week Governor Dayton vetoed most of the GOP budget bills.  They all came to his desk with similar flaws;  they failed to use the budget surplus to invest in the future of Minnesota and they contained policy provisions that did not belong in budget bills, violating a provision of the state constitution that prohibits multiple bills being bundled into one larger package of bills.  It is instructive to read the governor’s veto letter, a portion of which is quoted below:
“Our environment and natural resources are central to our economy culture, and wellbeing.  House File 888 puts at risk core values that define our state’s identity of practical and common sense protections supported by efficient government programs that  guarantee a clean healthy environment where all Minnesotans can thrive.
In a time of surplus, and after years of implementing improvements to our permitting  and environmental review systems, this bill leaves a significant funding gap and makes unwarranted policy changes that would thwart the progress we have make together.  Ultimately this bill would lead to a significant reduction of environmental services and layoffs of public servants.
Without [the needed] funds services and facilities will be reduced.  Some state park campgrounds will be closed or their seasons shortened.  Fewer lakes will be stocked with fish.  DNR’s ability to coordinate and collaborate with lake associations and conservation clubs will be reduced.  The refusal to invest in Minnesota’s outdoor heritage is an affront to all who hunt, fish boatman use ATV’s and snowmobile.”
The Governor’s letter continues to detail additional cuts to environmental programs including an unwarranted raid on the Legacy Fund to pay for County Soil and Water administration expenses.  The Governor’s veto is not an obstructionist ploy as the Republicans have claimed, but an attempt to salvage the environmental and cultural legacy of Minnesota from the ravages of a slash and burn Republican budget.
John King
15125 County 38
Long Prairie, MN
320.732.3321

Governor Dayton vetoed 10 reactionary Republican loaded with addon that had nothing to do with the budget. Attached are 3 of the Governor’s veto letters.  thanks to John King for providing the links.

This is a link to Gov Dayton’s veto letter of the Agriculture bill.  It is revealing in that it discredits Gazelka’s accusation that the Governor was failing to compromise in negotiations.  It also highlights how the GOP is failing to invest i Minnesota.
John King
http://mn.gov/gov-stat/pdf/2017_05_12_Letter_Ch_41_Veto.pdf
This is a link to the Governor’s veto of the environmental bill.  The first paragraphs are key in understanding how the GOP budget slashes spending and services and puts needed environmental policies at risk.
​http://mn.gov/gov-stat/pdf/2017_05_12_Letter_Ch_42_Veto.pdf​
John King
Below is a link to Governor Dayton’s veto of the Health and Human Services bill.  The nearly 20% cut to the Family Planning Special Projects grant shows how shortsighted the bill is.  Family Planning Special Projects reached out to 30,000 people with family planning services and information and in the process significantly reduced teen and unwanted pregnancies.  The resulting savings in social services far exceeded any cuts the GOP is making.
John KIng
http://mn.gov/gov-stat/pdf/2017_05_12_Letter_Ch_45_Veto.pdf

Three Minnesota Legislative Conference Committees have adopted “delete everything” amendments that reflect the outcomes of a budget agreement reached between House and Senate leadership late last week. Despite a budget surplus of more than $1.5 billion, the Legislature’s budget imposes cuts on funding for clean air and clean water, underfunds public transit, and includes hundreds of pages of damaging policy initiatives. Leaders of the Sierra Club North Star Chapter voiced their opposition to these bills and called upon legislators to reconsider these damaging provisions. For more information, contact Justin Fay at Justin.fay@sierraclub.org, 612-251-1457.

FOR IMMEDIATE RELEASE
May 1, 2017
Media Contact:
Justin Fay, Justin.fay@sierraclub.org, 612-251-1457
Minnesota Legislature’s Budget Packed with Attacks on Clean Air, Water and Public Transit
Saint Paul, MINN. (May 1, 2017) – Today, conference committees in the Minnesota Legislature adopted “delete everything” amendments that reflect the outcomes of a budget agreement reached between House and Senate leadership late last week. Despite a budget surplus of more than $1.5 billion, the Legislature’s budget imposes cuts on funding for clean air and clean water, underfunds public transit, and includes hundreds of pages of damaging policy initiatives.
Leaders of the Sierra Club North Star Chapter responded to the Legislature’s budget bills:
Margaret Levin, State Director of the Sierra Club North Star Chapter issued the following statement in response to the Environment and Natural Resources Omnibus Bill (HF888): “Minnesotans have repeatedly made it clear that they expect their state leaders to provide adequate funding for work to protect Minnesota’s air, water and the health of our communities. Not only does this bill fail to keep the faith with Minnesota voters, it also includes a laundry list of sweetheart policy provisions for special interests, including new and damaging barriers to the implementation and enforcement of standards for clean air and clean water. We strongly urge legislative leaders to reconsider this misguided direction for Minnesota.”
Erin Daly, Chair of the Sierra Club North Star Chapter’s Land Use and Transportation Committee issued the following statement in response to the Transportation Omnibus Bill (HF861): “Our transportation system is the backbone of Minnesota’s economy. Unfortunately, despite a significant budget surplus, the Legislature has failed to provide adequate funding for public transit. These shortfalls will lead directly to worsening congestion and dirtier air, and create unnecessary new barriers for Minnesotans who simply need to get to work. This bill represents a clear failure by the Legislature to consider the needs of all Minnesotans, including and especially low income Minnesotans and those who are unable to drive. Minnesotans deserve a transportation system that works, and this bill doesn’t come close.”
SJ Spitzer, Co-Chair of the Sierra Club North Star Chapter’s Clean Air and Renewable Energy Committee issued the following statement in response to the Jobs and Energy Omnibus Bill (SF1937):“The future is clear: Minnesota is on the path to cleaner energy thanks to affordable wind, solar and efficiency. The Legislature is sadly on a different path – succumbing to the whims of the oil and gas industries at the expense of Minnesota consumers. If allowed to become law, this bill will result in slower and more expensive decision-making for energy consumers along with costly new pipeline projects that threaten our waters, the integrity of private land and indigenous treaty rights. We ask legislators to reconsider including these damaging policy proposals and fully fund Governor Dayton’s budget request for the critical work of building and maintaining the energy system of the future.”
###
—
Pam McCarthy-Kern   612-360-0647 – Mobile   www.cathrynkennedy.com